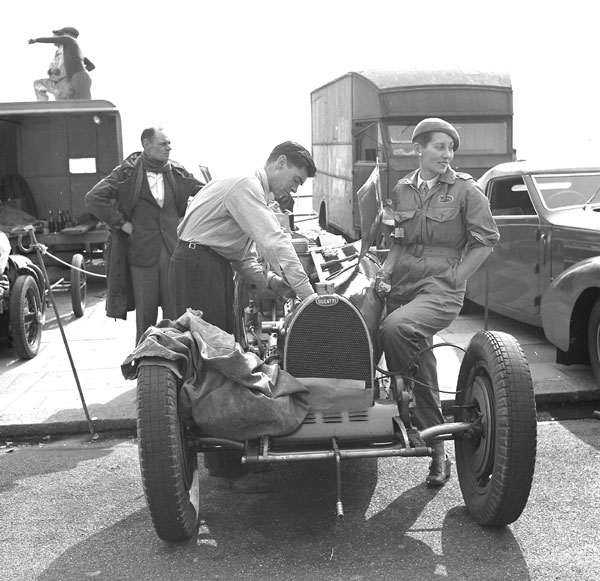 Memories of the ‘Brooklands’ Racing Scene in the 30s    Edited extracts by MartinStubbs from the unpublished autobiography of Dacre Stubbs   So I learnt the hard way about the effect that centrifugal forces had upon the car when negotiating the steeply banked turns, like driving up a hill for nearly half the circuit. Later I had a chance to drive a Type 51 Bugatti around the track and experienced the same thing. This machine was capable of 130mph with its 8 cylinder, 2.3-litre twin-cam supercharged engine. A very different kettle of fish to my Aston Martin. Although I found the Bugatti easy to manage despite the rather daunting spartan cockpit and terrific acceleration I never succeeded in getting the lap times I expected. My ambition was to lap Brooklands at 125mph, a speed I felt the car could obtain. Alas my best time for three laps barely exceeded 100mph and I wasn’t able to keep the car any longer to endeavor to improve this figure.

As it happens I came across this Bugatti once more after the 1939/45 war. It was in the hands of my dear but temperamental friend ‘Twink’ Wincop who with his attractive wife Monica, lived close to us in Surrey. We went to many races and speed trials together, and on one occasion when Granston Park aerodrome was first opened as a road circuit, I was permitted a few laps for old times sake. I found the Type 51 superb on this occasion in all respects except that in top gear it never attained the maximum speed of which it should have been capable. It was of course the old trouble of finance which so many of us experienced before and after the war. Although we worked to maintain the car in top condition, there were limitations to our capabilities, such as work which could only be carried out in specialist shops at considerable expense, plus access to facilities for Dynamometer testing. I always suspected that the superchargers internal clearances between the rotor blades and drive gears could be a little worn.

I could never be classed as an eligible racing driver under the rules laid down by the elite BRDC (Brooklands Racing Drivers Club). It was not sufficient to be just a member of the BARC, one had to have earned ones drivers spurs so to speak. It being necessary for membership to have taken part in at least one of the major races such as the Mille Miglia in Italy, Le Mans in France, Donington or Silverston and a few other GP events. Alternatively to have made a name for oneself by being highly placed in some of Brooklands major races. To gain any notoriety in the racing world was not for me, who had neither the finance or the time, but was utterly content to enjoy the facilities of Brooklands membership, with opportunities to drive fast and interesting cars. In those times despite the unpredictable English climate, I seldom drove anything other than an open car invariably without a windscreen. Goggles were mandatory and if the car had a hood then this was erected for older passengers or ultra sensitive girl friends.
Tweet