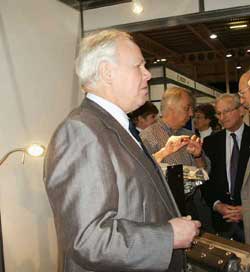 Carol Corliss writes on the History of Cosworth

MIKE COSTIN, BEN ROOD AND KEITH DUCKWORTH TALK ABOUT THE BEGINNINGS OF COSWORTH

Keith Duckworth, the great engineer and founder of Cosworth Engineering sadly died In December 2005. I had the great privilege of spending time with the three men who laid the foundations of this Iconic firm. This article was published first in Octane Magazine 2005 after the International Historic Motorsports Show where I was hosting their visit.

Born Harrow, North London, Mike Costin grew up in that area, one of 4 children, the oldest being Frank whose interest in cars helped to foster Mike's growing mechanical leanings. The other brother Eric was sadly killed during the war in 1944. A sister, Mary is 3 years younger than Mike.

He had a very early interest in all things mechanical ‑ insisting at the age of 3 that a sparking plug was attached to his pedal car, so that it would go.

Mike followed Frank into the aircraft industry and served a full apprenticeship with de Havilland at Hatfield ending as a Licenced Engineer. Frank did of course follow the path of body design, bringing his knowledge of aerodynamics into streamlining bodies for racing cars. He designed the Lotus 16, Vanwall GP and various other cars of that time and along the way became half of Marcos.

On completion of National Service in December 1952, Mike returned to de Havilland, working in a Drawing Office designing test equipment for now aircraft. One of these was the Comet, the first jet airliner to go into regular service.

At this time Mike had very little interest in motor sport but did belong to the 750 Motor Club and through club activities met a lot of enthusiasts who were busy putting together competitive cars to enter in the fast growing post‑war club scene. Peter Ross was one such chap; he also was a de Havilland apprentice too and was very keen to get further into the sport. Both Mike and Peter ran very tatty Austin Sevens and were constantly tinkering with them. Two of Peter Ross's friends were Ray Wootton, who ran an early special which had been constructed by another friend, Colin Chapman.

Mike was introduced to Colin, who had recently split with the Allen Brothers, as a chap who could help build kits of his latest project ‑ the Mk 6 Lotus.
A trip to Homsey to discuss the possibility culminated in an agreement for Mike to help build a works Mk 6 in exchange for sharing the driving of this. The power unit was the 1172 E93A Ford Engine. This was tweaked by a modification to the cam‑followers that Colin designed and Mike made. Little has ever been mentioned about this but it certainly improved performance.

Although Mike did "reasonaby well" in club events, Colin did not stick to the agreement and the driving was anything but shared.

At this point, Colin Chapman was working at British Aluminium, Keith Duckworth was still at Imperial College and Mike at de Havilland. Colin and Mike went full time at Hornsey on 1st January, 1955. By which time there were about a dozen people headed by Norman (Nobby) Clarke who was the first full time employee, starting some time in 1954.

In 1958 Keith Duckworth suggested to Mike that they form an engineering company between them, thus, Cosworth came into being. Having recently left Lotus, Keith's workshop was at that time in Friern Barnett, Herts, for three years, Mike carried on at Lotus while Keith worked at getting the Company off the ground. He brought in another highly talented engineer, Ben Rood who amazingly had, and still has, not a single recognised qualification as an engineer. He had, while in his mid teens purchased a lathe and installed it at the rear of his father's ice cream shop in Bethnal Green. In the highly utilitarian commercial world which was post‑war Britain, industrial machinery was very hard to come by. Ben purchased defunct machinery and converted and modified wherever possible. It was a great grounding for innovative thinking and ingenuity. His passion at that time was motor cycles and he spent a lot of time making up modified parts for the bikes and had actually built two of his own design 350cc machines up in the early fifties, racing them and Nortons at various events including the Manx TT.

Keith Duckworth's initial attitude to the early beginnings of the business was very philosophical; "I thought we could have a bit of fun and maybe make some money"
When Lotus moved from their cramped premises at Homsey and Edmonton to Cheshunt, Cosworth took over the Edmonton workshop. Cosworth stayed at Edmonton until the move to Northampton in 1964. Ben had his own company at Walthamstow and operated independently but nearly 100% of his production was Cosworth components. He had made a deal with Keith that his Company would become part of Cosworth with the move to Northampton when he then became a director and shareholder in Cosworth.

Both Keith Duckworth and Ben Rood have described Mike as 'Having a brain like a slide rule and an incredible talent for spotting when an idea was feasible and when not, prior to any calculations being undertakers". Although Mike and Ben freely refer to Keith as a genius, the three key members of the Company were very much inter‑dependent, they habitually bounced ideas off each other Often Keith would have had one of his flashes of brilliance and throw the idea at the other two, inviting comment or criticism. They rarely disagreed with the principle but would often add their thoughts or suggestions. 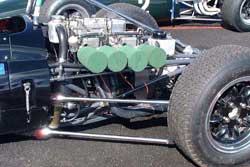 As history has shown, the formula did work. Starting off with making parts for the Ford 105E engine, increasingly successful, the business was moved to Northampton in 1964. Ben Rood tells of the dark November day when they sat in an office on makeshift seats with a hastily procured table, no heating and no lighting in the building, to interview 150 prospective employees by torchlight with a portable oil heater prior to the factory opening. The Directors of the Company at the time of the move were; Keith Duckworth, Mike Costin, Ben Rood and Bill Brown. That year they produced the Ford SCA 1000cc F2 engine.

In 1966, the new 3 litre formula had caught most of the F1 teams napping, indeed wily Jack Brabham had stolen the march, with his development of the sturdy Repco, engine and secured the World Constructor and Driver Championships for himself that year. Reliability was the key to his success.

Early that season Cohn Chapman had come knocking on the Cosworth door with a proposal to build a feasible V8 engine. Ford, after much negotiation agreed to fund the project, the deal being that the engine would be based around developing the 116E engine, initially building a I500cc; Four and progressing to the all new V8 3 litre specification.

The initial in‑car testing of the engine was carried out by Mike Costin who had not forgotten how to drive. He was ideally placed to marry up his technical knowledge with enough driving skills to put the engine through its paces. The later stages of testing were handed over to Graham Hill who was immediately impressed by its performance
The DFV as it was to be known became the most prolifically successful racing engine in the history of the sport with 155 wins to its credit. The first being powering the late, great, Jim Clark to victory in the Lotus 49 at Zandvoort in 1967 and the last at the U.S. Grand Prix in 1983 where Michele Alboreto won for Ken Tyrrell.

In 1980 the Company was sold to the United Engineering Group and after working with the new regime for ten years, this unique threesome went their separate ways into semi‑retirement. Mike did collaborate on projects with Keith Duckworth, they kept busy carrying out consultancy work where appropriate. He will continue to work in this way.
Ben Rood also works in a consultancy capacity, Ilmor Engineering being a major client of his who benefit from his years of experience. His wife Jane is able to enjoy this more relaxing period of their lives. Rhoda, Mike's wife of 53 years sees a little more of him these days too.

Both Mike and Ben's great loves are flying and gliding which they both do to good effect, being well respected in those circles. Now that time is not such a precious commodity, both are able to indulge themselves a little more in this field.
Ben also keeps a superb sea going boat moored at Harwich which he uses whenever possible.

Keith Duckworth had the last word regarding this alliance, he seriously doubted that this country is turning out the type of engineers that could form another such team. "I am a great advocate for the apprenticeship process with a firm grounding on the shop‑floor leading on to the higher levels of ONC and HNC college qualifications. The whole system has been changed and I believe that as a result, British engineering is suffering".
Mike Costin and Ben Rood expect to be attending this year's International Historic Motorsports Show at Stoneleigh on 24/25/26 of February

I will be eternally grateful that I had the opportunity of experiencing the incredible interaction between all three of these very special men. 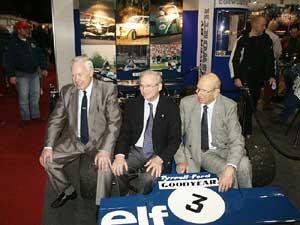