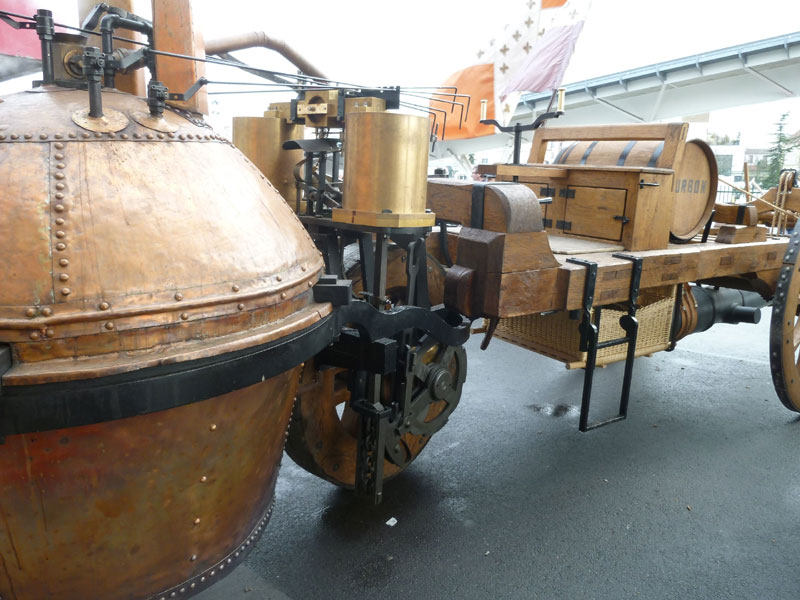 The Cugnot Steam Carriage at RétromobileJ-P Bush and Bill Hunter   The First Automobile .   Roger Bacon, (1214-94) the English philosopher and scientist predicted that "one day we shall construct chariots with incredible speed without the aid of any animal." It might be remembered that Bacon spent 10 years of his life in prison accused of magic in a pact with the devil.   Leonardo da Vinci (1452-1519) made sketches of mechanically-propelled vehicles. In the Leonardo Museum in Amboise, France, you can see a model of a clockwork-powered vehicle that he designed..   The inventor of the first mechanically-propelled vehicle that actually worked was a Frenchman - Captain Nicolas Joseph Cugnot of the French Artillery. By 1765 he had built a steam driven carriage capable of carrying three passengers at the speed of just over 2 miles an hour.   He was granted funds from the Minister for War to build a steam carriage capable of hauling artillery pieces. Its construction was undoubtedly made possible by a recently-invented boring machine which permitted, for the first time, the construction of accurately machined cylinders.   By 1769 or 1770 Cugnot's massive wooden tricycle was ready. It had a double walled boiler suspended ahead of the single front wheel from which steam passed to twin vertical cylinders and which moved pistons connected by conrods and cranks to the single front wheel.*  * The transmission to the driving wheel was by connecting rods which actuated a pair of ratchet mechanisms, each turning a notched wheel on either side of the wheel. (from Tony Press) This vehicle weighed 5 tonnes and had a maximum speed of around 3 mph. Its first tests were successful, but later it collided with and demolished itself and a stone wall. l.
Tweet