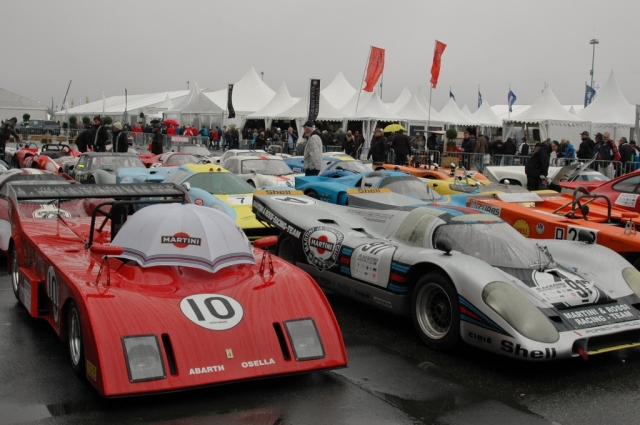 It was 1973, when Hubertus Count von Dönhof invited some friends for a meeting at the Nürburgring to prove themselves that their vintage racing cars were still capable for fast laps. The next year Count von Dönhof organised a race-weekend and it was called the AvD Oldtimer Grand Prix. Each year the event developed itself and attracted more and more visitors. During the 45th edition of the AvD Oldtimer Grand Prix the weather conditions were bad but despite these circumstances almost 45,000 visitors were enjoying the races and demonstration runs. Only on Sunday just before lunchtime the sun started shining and the temperature rose to 22 degrees Celsius.
A range of renowned manufacturers used the event as an opportunity to show their new and historic vehicles. For instance two parades with an ample display of vehicles from Skoda’s brand history took place on the race track. Alfa Romeo underlined its sportiness with a large number of cars entered in the Touring Car and GT Trophy and they exhibited numerous vehicles at the Mercedes-Arena. The grand stage there belonged to Porsche where in an area of 16,000 square metres customers and visitors had the opportunity to get a first-hand impression of the huge range offered by the classic car specialists from Zuffenhausen. The British marque Jaguar Land Rover welcomed visitors with a superb display at the entrance to the paddock. Last year Jaguar Land Rover opened a huge new Classic Works facility in Coventry to build, restore and allow people to enjoy legendary cars from both brands. The so-called “Reborn Programme” focusses on restoration, rather than replacement, retaining as much of the original car as possible, although certain safety-critical parts will be all new and some of the body panels will be replaced with corrosion-resistant ones. At 14,000 square metres, Jaguar Land Rover Classic Works is the largest facility of its type in the world, with a dedicated showroom space and 54 workshop bays for servicing and restoring all Jaguar and Land Rover models out of production for a decade or more. At the Nürburgring the “Reborn Programme” presented two examples at the Jaguar complex: a first-generation Range Rover and a Jaguar E-Type were each displayed as a non-restored original and a ‘reborn’, perfectly restored model. The first of the nine new, hand-built Jaguar XKSSs was also on display.

AvD Touring Car and GT Trophy
The one-hour race of the AvD Touring Car and GT Trophy on Saturday afternoon showed a fully booked field of racing cars. The full 60-minutes were driven under rainy weather conditions. The victory was clinched by one of the newest models in the field. Pole sitter Sebastian Glaser (Munich) in his 1971 Ford Escort RS 1600 scored a lights-to-flag victory. Following a turbulent race and a fantastic comeback drive, after having started the race only from 26th on the grid due to technical issues in practice, Germans Schmersal and Stursberg took second place in a similar Ford Escort. German Niestrath finishing third overall in his Alfa Romeo 1750 GTAm and also secured the winner’s trophy in the Alfa Romeo Trophy sponsored by Alfa Romeo Germany. Seven-time German Rally Champion Matthias Kahle drove the one-hour race in the small 1,300 cc Skoda 130 RS and on the wet track he managed to get into a fifth position. However, the drying track caused him and his teammate to drop to a 21th position.

New Touring Car Classics
The new Touring Car Classic race attracted much attention. Anton Werner (Audi 80 B4 Prototype) drove from pole position followed by Stefan Rupp the high-reving Alfa Romeo 155 V6 Ti. In lap 10 the Audi broke down and Rupp drove to victory without any competitors in his slipstream. Finishing second and third were both Mercedes-Benz AMGs driven by Jörg Hatscher and Thorsten Stadler The fastest Ford Sierra RS Cosworth managed to get in fourth place overall.

DRM Revival
The revival of the German racing championship (DRM) featured some heavily modified sedans, as well as pure-bodied racing cars like the Porsche 935, BMW M1 Procar, Ford Escort BDA, Ford Capri RS3100 and BMW 3.0 CSL. These cars electrified the fans in the 70s because the drivers had spectacular battles in the German Racesport Championship (Deutsche Rennsport-Meisterschaft). Two of these rivals met each other again. The Cologne-based Kremer racing team presented their 1979 Porsche 935 K3 in the aggressive Jägermeister livery. With a little less horsepower but no less spectacular performance, it pitted against the 1980 Zakspeed Capri now being owned by Mücke Motorsport from Berlin. Formerly driven by Klaus Ludwig, this weekend team manager Peter Mücke drove the beast. His son Stefan Mücke drove the 1974 Ford Capri RS3100. The first race on Saturday was won by Wolfgang Kaufmann in the Kremer Porsche. The second race Afschin Fatemi in the Porsche 935/5 took the chequered flag. Besides the sporty exhaust sounds the audience was entertained by flames from the exhausts of the Porsches and BMW M1s.

Masters Sports Cars
Surely one of the most attractive cars in the Masters Sports Car field was the Porsche 917, which Claudio Roddaro brought from France to the Eifel. He started with his five-litre twelve-cylinder in the middle of the field between open Lola sports cars, light Chevron prototypes and powerful 1960's Lola T70s. In the end he finished sixth, against the leading Diogo Ferrao and Martin Stretton in the Lola T292. Michael Gans (Lola T292) finished second and Jason Wright/mark Donovan finished third

Two-seater racing cars and GTs - Lotus against Maserati
The Saturday-evening race for two-seater racing cars and GTs is one of the highlights of this event. Somewhat surprising for all the visitors was the battle between the powerful Maseratis and the lightweight nimble Lotus types 15 and Eleven. The one-hour race was ultimately won by Ulrich Schumacher in the Maserati Tip 63. Michael Gans (Lotus 15) finished second. The equippe Hart Steven/Fierro Guillermo (Maserati Tipo 61) finished third and Jörg Markus in the Lotus Eleven fourth.

Gentlemen Drivers race
The Gentlemen Drivers championship provides mini-endurance races for pre-1966 GT cars with one or two drivers per car and pit stops. With a class structure split by year and engine capacity, you find Aston Martin, Jaguar, AC, Porsche, Ferrari, MG, Morgan and TVR racing against Chevrolet, Ford, Austin Healey Alfa Romeo, Triumph and Lotus in double-driver pit stop races where exciting racing, big grids and a great variety of cars go hand in hand. 27 cars were on the starting grid, pole position was for Michael Gans and Andy Wolfe in the AC Cobra. Strong opposition came from Thomas/Callum (Jaguar E-Type) and Hall/ Willis (AC Cobra). Despite their attempts to get near the AC Cobra of Gans/Wolfe, it was the Jaguar E-Type of Thomas/Calum that finished in second position. Behind the E-Type, Nicolai Kjaergaard (Lotus Elan) finished third.

Masters Formula One
For the visitors the Formula 1 cars with their three-litre Cosworth engines is certainly one of the highlights. The 18 cars on the starting grid cover more than a decade of Formula One history. So it is not surprising that there’s 18 seconds difference in lap time between a 1970 Tyrrell Ford 001 and Williams-Ford FW07B of 1980 during the training session. Michael Lyons (Williams FW07B) won the first race on Saturday while the Sunday race was won by Martin Stretton in the Tyrrell 012. But after the stage ceremony, it became clear that Stretton's Tyrrell did not comply with the rules. Just before the race his team had decided to switch from slicks to rain tires and they were forgotten to check the ride height. Stretton was eliminated from the result list what caused that Simon Fish (Ensign N180) became third. Unfortunately, the second race did not end completely without severe damage, as the battle between Smith-Hilliard (Fittipaldi F5A) and Thornton (Lotus 77) ended in tears when they clashed into turn one at the start of lap 7, the Fittipaldi being pushed up into the air as the pair made contact. Smith-Hilliard was out on the spot, causing the safety car to come out, while Thornton could pursue the race without any major damage.

Historic Grand Prix Cars pre-1960
Twenty-four cars appeared on the grid for the first race on a rainy Saturday-afternoon of which 4 cars were Maseratis 250 F. In this first race, Andy Willis (Ferrari 246 Dino) and Guillermo Fierro (Maserati 250F) chased each other for the leading position and finally it was Willis who won the race. On Sunday, Joaquin Folch drove off to an unbeaten victory, but his in the final round his Lotus 16 stalled - and again Willis took the lead and won the race

The 45th edition of the AvD Oldtimer Grand Prix didn't welcome competitors and visitors with the best of weather but there was still some great racing on offer!