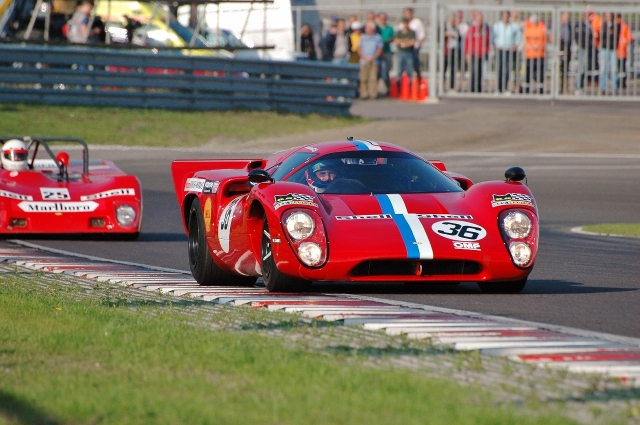 At Zandvoort the history of motor racing bursts in to life again when the yearly Historic Grand Prix event is held. According to former Formula 1 racing driver and Le Mans winner Gijs van Lennep, this is the most interesting and entertaining event of the year at Circuit Park Zandvoort. And indeed, with more than 50000 spectators, the Historic Grand Prix is the most visited event of the year for this legendary Circuit ! Of course the fine weather conditions were an important factor to this success. The fourth edition of this event entertained the audience with an extensive programme of 19 races and several demonstrations.
Freddie Hunt, the 24-year old son, of the 1976 Formula 1 champion James Hunt, demonstrated the Hesketh 308C. It’s 40 years ago that James celebrated his first F1 victory at the Dutch race track. Exactly 40 years after the memorable win, Freddie got behind the wheel of the white Hesketh to perform demonstrations during this event. Freddie is pursuing a career in GT racing with the ultimate goal of participating in the 24 Hours of Le Mans. “It’s an incredible feeling to drive here at Zandvoort, 40 years after my dad’s first win and he would have celebrated his birthday this weekend,” said Hunt. “It’s an honour driving at such an historic track and I’m really enjoying it.”

The BMW Group Classic brought some prominent vehicles to Circuit Park Zandvoort. Not least, the Brabham BMW BT52 Formula 1 car with which Nelson Piquet won the world title in 1983. Jan Lammers and Michael Bleekemolen performed demonstrations with the BMW M1 Procar, 35 and 36 years after they both participated in this legendary championship that held races at historic circuits like Zandvoort. “It’s fantastic and a great honour to drive this vehicle after all those years,” said Bleekemolen. “It’s unique what BMW has brought to the track.”

Porsche was well represented and had put the Porsche 917K on display in the prominent and traditional ‘Porsche Village’. It was with this car Gijs van Lennep and Dr. Helmut Marko won the 24 Hours of Le Mans in 1971, but it was the first time that this legendary Porsche was transported to the Netherlands. Many parts of this car are made out of magnesium alloys, a metal which becomes very brittle after so many years. It’s unlikely that this car will ever return to the track, without replacing all these fragile parts.

FIA Masters Historic Formula One races
Twenty-one drivers qualified themselves for the two races this weekend at Zandvoort.
It wasn’t Michael Lyons on pole position for the first race but Belgian Loic Deman in the Tyrrell 011. Massive mechanical problems of the Hesketh 308E (blown clutch and a sheared half-shaft) resulted in a late night rebuild session for the team and a third position on the grid for Michael. Second on the grid was Rob Hall (Ligier-Matra JS17). The Hesketh was in good working order again during the first race on Saturday as Michael lead most of the laps but rear brake problems allowed Loic Deman, Rob Hall and Andy Wolfe (Tyrrell 011) to pass him and these three gentlemen were on the podium in the aformentioned order.
On Sunday, Hall took the lead from the start immediately followed by pole-sitter Deman and Lyons in third position. Soon Michael revenged himself from Hall and Deman and he was in the leading position until the end of the race. Hall finished 3.41 seconds later followed by Wolfe. Deman ran into trouble and finished fifth. With two rounds remaining (Spa and Dijon) Andy Wolfe leads the Post 1978 Championship by six points from Loic Deman, and Michael Lyons trails Jason Wright by four points in the Pre-1978 Championship.

FIA Masters Historic Sports Car Championship race
For the 1 hour race in the Masters Historic Sports Car Championship, Dutchman David Hart drove his Lola T70 Mk3B together with Martin Stretton. Jon Minshaw led the race in a similar car followed by Hart. At a quarter of the race-distance Hart took the opportunity to pass Minshaw, but this action resulted in heavy body contact with the car behind him.
The Dutchman was forced to retire with a bended steering rod but the Lola had also lost the right door during the confrontation. Unable to set a time in practice, Leo Voyazides/Simon Hadfield were on the last position of the grid but they showed their driving skills as they stormed through almost the entire field to take second place in the T70 Mk3B while Michael Gans/Andy Wolfe finished in third position in the 4-cylinder Lola T290. The next race for Masters Historic Racing is the Spa 6 Hours meeting on September 18-20.

Gentlemen Drivers race
One of the highlights of this weekend was the 90-minutes Gentlemen Drivers Pre-66 GT race on Saturday, late in the afternoon. This was particulary interesting for the Dutch audience as several Dutch drivers qualified on the first rows of the starting grid. Dutch historic racers David Hart and Hans Hugenholtz invited international stars Giedo van der Garde and Tom Coronel to their two-car AC Cobra line-up. However it was Simon Hadfield, quick as ever, who snatched pole position from Van der Garde. Simon immediately took the lead in the race with the red Shelby Daytona Coupe which he shared with Leo Voyazides. David's start with the Cobra was perfect. He managed to maintain his second position, but had to make a hard fight with the Cobras of Voyazides and Wolfe. It was a close race in the leading group, with almost identical lap times until the mandatory driver change took place. Hart/Van der Garde received a 15-second stop-and-go penalty as their pit stop was 20 seconds too early.
So Hadfields/Voyazides win was secured but the penalty stop also allowed Julian Thomas/Nigel Greensall (Jaguar E-type) to take second place. Van der Garde charged back from sixth to claim the final podium position together with David Hart. Coronel/Hugenholtz managed to finish in fourth place with the fastest lap time in the pocket.

Dutch Championship for Historic Touring Cars and GTs(NK HTGT)
The cars participating in the NK HTGT are built in the period 1947 until 1965. They must be prepared according to FIA Appendix K. The cars must comply with the specifications from the period when these cars were originally built. Only Dunlop Racing L or M section tires (compound 204) are allowed. With 57 very different cars on the tarmac, the two Dutch pre-’66 championship races promised plenty of action. In the Saturday’s race, the Corvettes made the headlines. It was Alexander van der Lof who had the best start in the Bizzarrini, but Michiel Campagne soon passed him in the powerful Corvette Grand Sport. Van der Lof then had his hands full holding off pole-sitter Nicky Pastorelli in the Ferrari 250GT, allowing Campagne to take a relatively easy win. Most impressive performance was by Roeland Voerman, driving the other Corvette. Starting as first reserve in 58th position, Voerman managed to move up to eighth position in just thirteen laps. In the saloon cars class, Norbert Gross in the Ford Falcon dominated the race. The start of Sunday’s race was exciting as three Ford Falcons contested the same piece of tarmac. One of them clobbered into the guardrail, causing a short intervention by the safety car. Yelmer Buurman, at the wheel of Van der Lofs Bizzarrini took the lead, with Pastorelli putting him under pressure. Successfully so, as Buurman ran wide in the fast Scheivlak corner allowing the Ferrari to pass him. The engine of Michiel Campagne’s Corvette Grand Sport didn’t run properly, leaving him unable to compete against the two younger drivers Pastorelli and Buurman. The touring car class saw a number of flag-ignoring incidents, resulting in time penalties.

The Saturdays Pre-66 Touring Car race didn’t show as many cars as the Dutch HTGT but the battle between Leo Voyazides/Simon Hadfield (Ford Falcon) and the Germans Alex Furiani/Frank Stippler (Alfa Romeo 1600 GTA) was thrilling. Both lapped the entire field and the Falcon was in the lead from the start but it was the Alfa that scored winning points once Stippler had taken over from Furiani.

Dutch Historic  GT & Touring Car race (NK GTTC)
NK GTTC is the official Dutch Championship for touring cars and GTs from the years 1966 - 1981. Especially for the Historic Grand Prix Zandvoort, the age limit was stretched to 1985. This championship exists only since 2010. "The Historic Grand Prix Zandvoort is for us the icing on the cake," said a spokesman of this racing-class. This weekend, the NK GTTC had a biggest grid with no less than 57 cars. On pole for the first race was Steve Dance in the Ford Capri 2600 RS, followed by the Lister-Knobbly Jaguar driven by Eike Wellhausen. Both cars didn’t score points in this race as two Porsches (driven by Lex Proper and Leonard Stolk) finished first and second followed by a Ford Escort RS1600 (Freddy van Sprundel). Steven Dance won race two followed by the two Porsches.

Historic Grand Prix Cars
In the field of the pre-61 Historic Grand Prix Cars the Scarab Offenhauser, owned and driven by Julian Bronson, made the fastest lap during qualifying but inspection of the engine afterwards showed a damaged piston of cylinder no.3. It was Guillermo Fierro, in the Maserati 250F, who won the first race followed by Tony Smith (Ferrari Dino). Fierro was less fortunate in second race on Sunday as the Maseratis engine stalled already in the first lap. The penultimate lap became very exciting as Marshall Bailey (Lotus-Climax 16) saw the chance to pass the leader of the race, Steve Hart in the Maserati 250F. On the long straight Hart took the lead again but Bailey passed him in one of the corners in the much lighter and manoeuvrable Lotus. Miles Griffiths (Brabham BT4) was on pole for the 2 races of the pre-1966 Grand Prix Cars. In race 1 he finished on a disappointing 24th (and last) position. Australian Andy Middlehurst (Lotus 25 R4) won both race 1 and race 2.
The other single-seater cars were well represented in the Historic Formula Two Championship, the FIA Lurani Trophy with Formula Junior cars and the Historic Monopostos race.

The fourth edition of the Historic Grand Prix Zandvoort was a great success in every aspect. The organisation of this event already looks forward to next year when the fifth anniversary will be celebrated. Circuit Park Zandvoort and the Dutch Historic Auto Ren Club have already planned the first meetings to organise another great spectacular event.