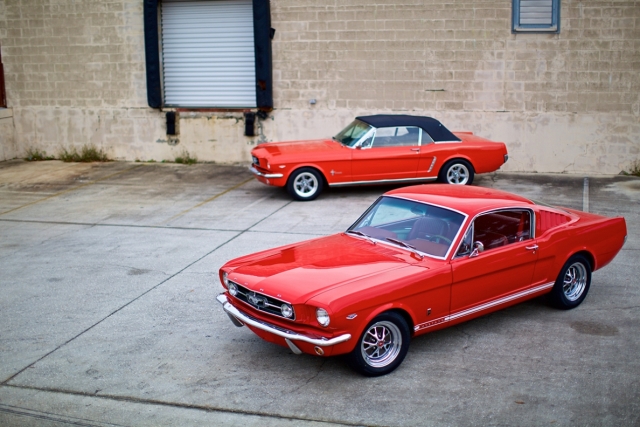 Have you ever thought of owning an original 1964 Ford Mustang but were you afraid of all the problems which may occur during a restauration ? Now’s the time to make your dreams come true as one of America’s most iconic cars of the sixties, is back in production and better than ever. A specialty automobile manufacturer based in Winter Park, Florida, named Revology Cars, is building brand new first generation Mustangs with modern technology. The first car was unveiled March 14 2015, at the Amelia Island Concours d’Elegance, one of the nation`s most prestigious automotive events.
The first generation Mustang ran from model year 1964 to 1966 and this first true replica of the Mustang, looks just as stunning as the original, but with modern powertrain and technology. The Revology replica features an all-new steel body, produced by Dynacorn and licensed by Ford. Revology makes several proprietary changes to the body in order to integrate the modern components. “We start with a licensed original body because it is authentic,” says Revology’s founder, Tom Scarpello.

As for the car’s suspension, it’s all-new as well. The front suspension is MacPherson strut and the rear end is a three-link design, developed by supplier RRS of Australia, specifically for this application. The three-link design was integrated to offer an excellent balance of performance and ride quality. Power four-wheel disc brakes inspire confidence, while standard power rack and pinion steering provides excellent feedback. The Revology Mustang replica is powered by a fuel injected 5.0L V8 engine producing 265 hp. and featuring a modern electronic engine management system. An electronically controlled automatic or a 5-speed manual transmission can be specified.

It features several creature comforts like power steering, remote keyless entry, power door locks, power seats, tilt steering column, intermittent wipers, digital message center, remote trunk release, and even Bluetooth “all carefully integrated into the interior to be minimally intrusive”.
The Revology Mustang comes standard with a New Vehicle Limited Warranty. It’s called the “1-3-5” warranty; Bumper to Bumper coverage lasts for one year without a mileage limit. Powertrain components are covered for three years, also with no mileage limit. Body sheet metal panels are covered for an extended Corrosion Coverage Period, which lasts for five years. Cars like these don’t come cheap with prices starting at $119.500. It is available in both convertible and fastback body style. Revology Cars is accepting orders now for delivery in Spring 2016.
Tweet
View the embedded image gallery online at:
https://www.motormarques.com/news/european-desk/item/678-revology-launched-it%E2%80%99s-ford-mustang-replica?tmpl=component&print=1#sigProId7c6d37439e