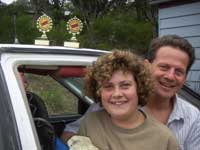 Lucas , now 11, first got interested in motor rallying when he was about about 7 years old. The first motorsport event he ever saw was a special stage tarmac rally in New South Wales. He has been hooked ever since.

The family took up rallying in 2003 when Bill acquired an already well-known rally car - a Suzuki Swift. Patrick, learned to drive it an hour or so after it had been unloaded from the trailer. Now, at age 14, he is Victoria's youngest holder of a competitor licence.

The Suzuki is in group N.  It has a 1300 cc engine. It has a long and succesful history.  In all it has completed 55 rallies.  5 with Bill driving, Patrick navigating and Lucas learning the tricks of the trade.

The Suzuki was converted to rally specifications by Tim Drummond - the shock absorber manufacturer from Sydney.  The smallish engine revs at 8000 rpm. When the car takes off at the start of the rally it is best to keep it down to 5 or 6000 depending on the surface.  Too high revs when the surface is slippery or gravelly you could just end up just digging a hole in the ground.

It develops 85 kW.  It weighs 850 kilograms.  So it has a good power to weight ratio.  Although it is the least powerful car in the field, it usually finishes halfway or better through whole field outright -- and most frequently it is a class winner.  It handles brilliantly with the Drummond suspension, which is probably the best part of the car.  It has a wheel at each corner and is beautifully balanced. 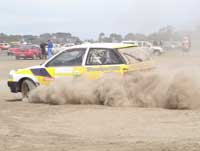 But torque is another matter. The Suzuki has decent torque only at about the top of its rev range.  Compared to say turbo four wheel drive cars which can develop torque low down in their rev range, and can power out of corners and blast away up hills, these manoeuvres are very tricky in the Suzuki, which struggles a bit, and you have to wait until the revs build up again before you can get back on speed.  Our picture on the right shows Patrick competing in one of his events - a motorkhana at Avalon, Victoria.

Asked whether he prefers to watch rallies by day or night,  Lucas said he prefers the daytime because you can see the cars and drivers more clearly. At night it's boring, when you have to wait for ages while drivers are being briefed, and while his father and brother spend up to 4 hours at a time concentrating on plotting  and marking route maps before they actually start. And apart from that - nighttime rallies usually finish late, like 3 o'clock in the morning,  which makes him very tired.

Patrick also prefers daytime rallies. Maps are easier to read, ladmarks easier to see. He has to keep an eye on the electronic trip meter, remembereing to re-set it every time, hold a bunch of figures in his head, make the right calls at the right times, and keep his cool when the Suzuki gets off course. Night time seems to make all this more difficult.

Bill finds something special about driving night time rallies. There is a special atmosphere when you're out in the forest with the driving lights cutting through the stillness and dark  You pass through control points and see the people standing in dim light around the service vehicles and warming their hands by fires in smoky brasiers.  Added to all this there is a greater demand on concentration as the the degree of difficulty is much greater

Patrick listens to his father with interest, nods in part agreement, and merely comments that navigating at night is very challenging

He's right about that. In a recent night rally a fast-moving tree leaped out of the dark and snapped off their driving light pod and did some other damage to the front of the car. Both driver and navigator did feel challenged.

From their home on Victoria's surf coast, they drive to the rally sites in their Volkwagen Transporter which serves as a tow car, service and general purpose vehicle. Recently, for recreation, they drove a 4-wheel-drive from Adelaide to Darwin. A distance of over 3 000 km.