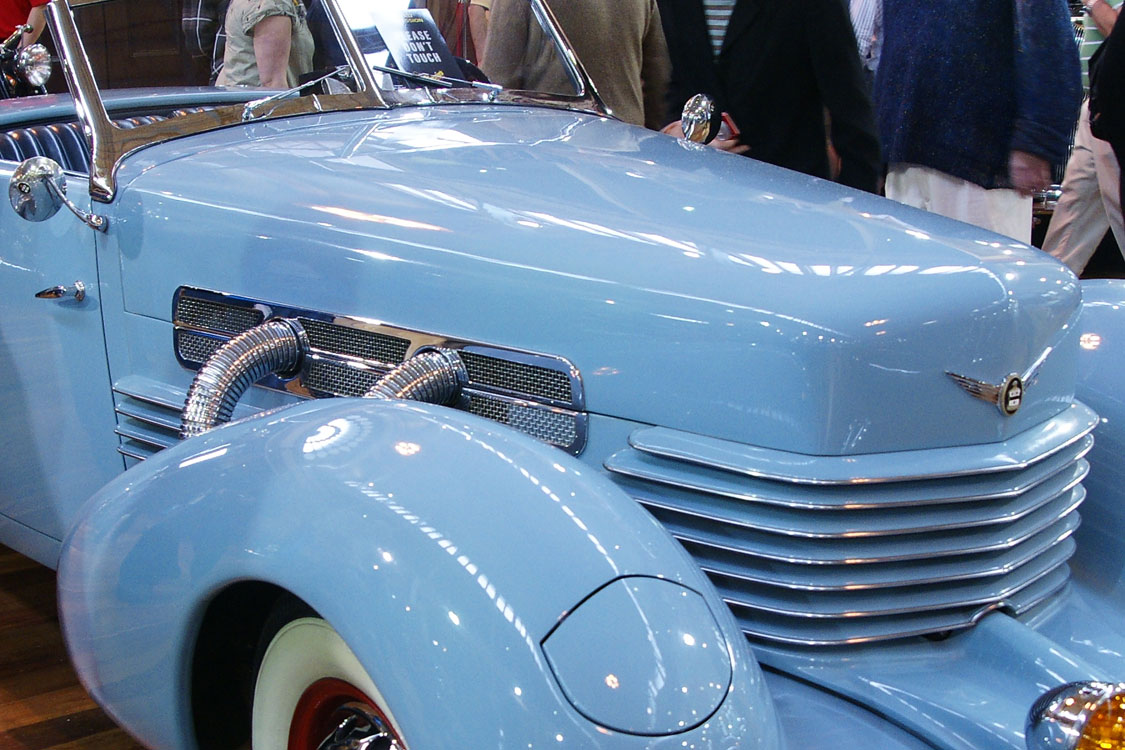 Photo - Richard Abey- October 2010
1936 Cord 810 SportsmanCabriolet    American pre -- war and vintage (1919 -- 1945) Owner: Mr Kerry Dowel, Fern tree Gully, Victoria   The Cord has to be one of the most distinctive and rare American cars of the Art Deco era. Designed by Gordon Beuhrig it was a project for the Auburn Car Company, it was nicknamed "the baby Deusy". It was later named Cord after the company owner, E.L. Cord.   The Cord 810 is one of the greater designs of the history of the automobile. Introduced in November 1935 at the New York Motor Show, it was received with an enthusiastic press. At the time it was reported that "for sheer taste, for functional correctness and for beauty, the 810 Cord is arguably the best design the American industry has ever produced." Such praise has continued unabated for more than seventy years and twice it has been selected by the New York Museum of Modern Art as one of the world's most outstanding designs of "rolling sculpture."   This particular supercharged example was owned by George Putnam, husband of the world famous aviator, Amelia Earhart, who was the first woman to fly across the Atlantic, in June 1928. Earhart was good friends with America's First Lady, Eleanor Roosevelt, and in effect gave her flying lessons.   This Cord is one of the very few painted in "Eleanor blue", designed to match the colour of Eleanor Roosevelt's inauguration gown. This 810 Sportsman Cabriolet was imported into Melbourne in 1991 and has since appeared in three made-for-television movies: "Blonde" (based on the life of Marilyn Monroe, "Child Star" (based on the life of Shirley Temple) and the recently critically acclaimed series: "The Pacific" produced by Steven Spielberg. October 31 2010
Tweet
Print Email
Rate this item
(0 votes)
Read 4059 times Last modified on Monday, 21 May 2012 17:14
« Cole, Trevor More in this category: Corliss, Carol »