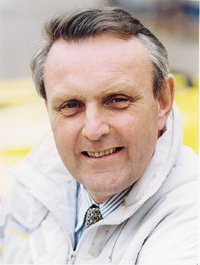 Tony Fall Obituary  From Carol Corliss
We are so sorry to hear of the death of one of the Nicer characters of motor sport.  My acquaintance with Tony Fall was purely through working alongside him at the Historic Motor Sports Show at Stoneleigh over the past few years.  He was very pleasant company and unfailingly courteous to the many fans who approached him at these events.  We send our condolences to his wife Pat and the family.   Carol Corliss   Quotes below   The death has occurred of Tony Fall, former
works rally driver, successful team manager,
and lately managing director of Safety Devices.

Tony was in Tanzania, assisting the organisers
of the East African Safari Classic Rally, when he
was taken ill. He died in his sleep on the night
of Saturday 1 December, of a suspected heart
attack.

Richard Anthony Fall was born in Bradford,
Yorkshire, in 1940. As a car salesman, he was
a club rally driver in a Mini. He was soon spotted
by BMC Competitions team manager Stuart
Turner, and co-opted into the works team
alongside Paddy Hopkirk, Timo Makinen and
Rauno Aaltonen. His first major international
victory in the Mini was the 1966 Circuit of
Ireland, co-driven by Henry Liddon.

He rallied with BMC for three seasons - including
competing on the original London Sydney
Marathon and finishing 23rd in a Morris 1800 -
and then joined the Lancia team, where he
achieved his highest-ever finish on the RAC Rally
of Great Britain: 3rd in 1969.

He joined Datsun for three seasons, achieving
many high placings on world rallies, at the same
time driving for other factory teams, including
BMW, Porsche and VW.

Tony tackled the World Cup Rally from London
to Mexico in 1970 with a celebrity co-driver,
footballer Jimmy Greaves, and they finished 6th.
Twenty-five years later, he competed on the
re-run of the event, finishing one place higher.
Tony achieved 12 international rally wins in his
driving career.

Success in the UK with DOT led to his
appointment as Director of Motor Sport for GM
Euro Sport, based in Russelsheim, Germany, in
1978. Under his direction, Walter Rohrl became
World Rally Champion in 1982, and - in the
latter part of the decade - Tony introduced the
Opel-Vauxhall Lotus formula for single-seat
racing cars, which launched the careers of
many Grand Prix stars, including Mika Hakkinen
and David Coulthard.

Tony Fall returned to the UK in 1990, initially as
manager then owner of the motor sport safety
equipment manufacturer, Safety Devices. He
was managing director of the Newmarket,
Suffolk, based company - famous for the
production of roll-over cages - at the time of
his death.

Tony, who in recent years had driven a replica
of his original Datsun in historic rallies with
Yvonne Mehta, was in Africa on "holiday",
helping with the organisation of an event he
loved, and which had been the scene of many
of his triumphs.

His wife Pat, sons Richard and Oliver from a
previous marriage, and grandchildren Louis (8),
Charles (6) and Mia (4), survive him.
Statement from the chairman of Safety Devices
International, Bevan Braithwaite OBE, FREng:

"Tony's passing comes as a huge shock to
everyone, as he appeared to be in the best of
health and was applying his great energy to his
many interests. His leadership of Safety Devices
International occupied much of his time, and the
past two years had been spent putting systems
in place that ensured the smooth operation of
the business, so that he could take more time
off participating in his great love - motor sport.

"As far as customers of SDI are concerned, you
should be assured that the business is in
excellent shape, with two and half thousand
products fully digitised for production, and
established procedures for the development of
safety cages for new vehicles.

"In the short term, I will be assisting Pat Fall in
the management of the company."