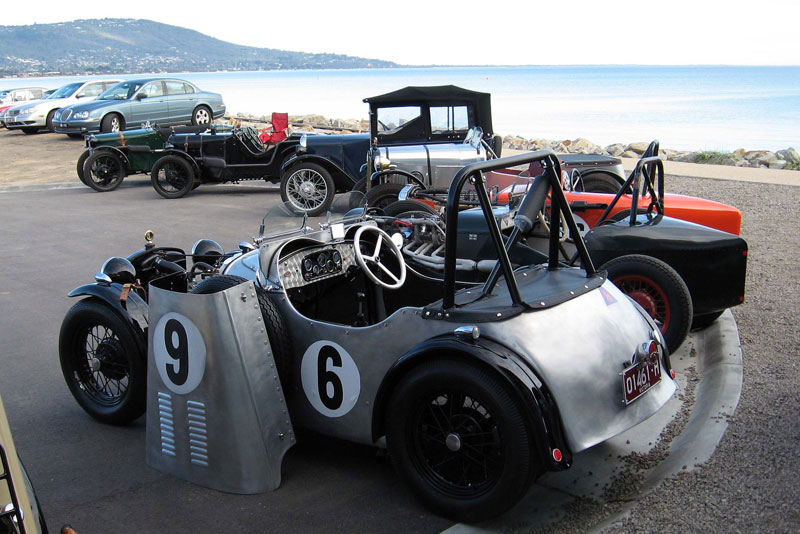 Courtesy Peter Matthews Photos Martin Stubbs Peninsula Boys
At 12 noon on July 15th , the Peninsula Boys met.at Safety Beach Sailing Club. As a preamble to that meeting, there was a display of Austin Seven cars, some of which are shown here. Eighty years ago an Austin 7 won the first Australian Grand Prix at Phillip Island. This race was re-enacted earlier this year.  A guest speaker was Graeme Steinfort, the president of the Austin 7 Club.
Peter Matthews took time off from his duty as compere of the meeting to talk to me about the Peninsular Boys.  Amongst other things Peter owns a  Nota, Nota Major, Nota Sportsman, plus a big side valve Ford that he races.
" I have an Elfin formula V. I. have two specials with Peugeot engines. I. have been in racing all the time, I love it. We started eight years ago. We are the only club in Australia that is free.  We raise money for Peter Mac for cancer research.  Last year we contributed $3000.  The club prints a newssheet which comes out four times a year that gives information about forthcoming events." Graham Steinfort was guest speaker at this particular meeting, mentioning among other things competitions which many of those present had attended where Motormarques colleague John Sutton in the United Kingdom was a principal contender. I also had a minute or so with Glenn Bishop, saying that I admired his car parked outside, remarking that it was looking as brilliant as ever.    "Yeah well, I decided it needed a clean up," he said   "After winter it had been pretty dirty and had been sitting there for about six weeks.  I decided to give it a bit of a quick clean." "When is the next time you are out?"   "Heathcote Sprints on the 17th of August, the week before the Rob Roy meeting on the 24th of August." "You have a busy time.  " "Well, yeah well we try to." "How many cars do you have?" "Five.  Hobby cars.  Two racing cars.  The Wasp.  The Austin 7 blown.  A 1935 Singer special sports -- it was a two seater sports racing car which ran at Winton many years ago.  It has now been re-bodied with a special body -- a two plus 2 sports all aluminium.  Quite a show car really .  It was built by Victor Stanley for Bernie Jacobsen.  I also have a J2 MG from America.  I have been restoring it for 10 years.  Whole new body, new wooden frame, a new panels, state of the art crankcase, competition rods, a special new clutch is being made, close ratio gearbox.  I reckon I have another two years to go before it is completed. You're looking well, I must say.  "Well, for a man who doesn't smoke or drink."   Bill Hunter
Tweet